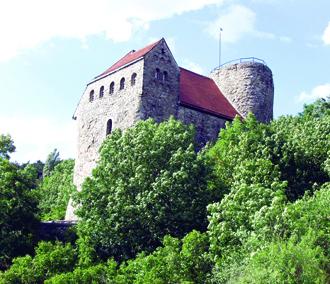 First built of wood, the tower served in 600 A.D. as the protection of the saltwater springs in the Franconian salt settlement. In the year 998 the "Franconhus" was first mentioned by name in an imperial document. Enclosed by a circular wall, the new keep with palace on the small knoll was integrated seamlessly in the likewise newly built city wall. A deep trench and a secret entrance provided extra protection and security. After the tower had lost its military significance, it was used as a fire observation and guard tower. The the first mention of the name "Hausmannsturm" was recorded in 1560.

Location
The Hausmann Tower is in the northeastern part of the city.

Directions
Follow the Poststraße to Hausmann Tower and the adjacent parking lot (at the spa park).

Opening times
At this time it is not possible to visit the tower.

Parking
Many free parking spaces are nearby.